A year rich in events 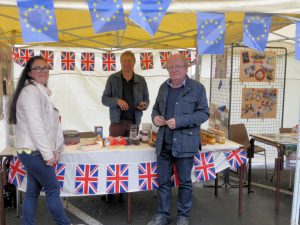 1 – A first for Sorigny. On 22 May 2016, the Committee of twinning of Sorigny organized the Festival of Europe with the twinning committees of the valley of the Indre. We organized a European market, a hike, a painting exhibition and a conference on the theme of the « Daily Europe ». This was a real success.

2 – From 26 May to 30 May 2016, a group of seven persons of the Twinning Committee, went to Box to attend the Box annual feast Box Revels. It was a true weekend of sharing and friendship.

3 – The festival of music: As every year we associated with the Committee of the festival and held the stand « pancakes frills » which pleased everyone – adults and children. 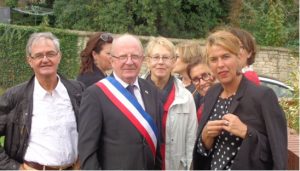 5 – From 2 to 5 September 2016, several people of the Twinning Committee accompanied by the Mayor, an assistant and two advisors, went to Box to formalize and sign our twinning agreements. It is expected that our English friends will come to France the weekend of 25/26 March 2017 to sign in their turn the Charter. We invite the entire Sorignoise population to participate. (See 2016 Box & Sorigny).

6 – Since September 21, 2016 The English language courses have resumed and given the success, a second course has been put in place to differentiate the levels of learning.
The schedules are unchanged: each Wednesday from 19h00 to 20h00 and 20h00 to 21h00.