At the Box Twinning Group AGM – there was confirmation that all requirements currently set by the Parish Council were met.

In April Barry Sims and Cheryl went to Sorigny to attend the first Quiz Night, joining the Sorigny Twinning Committee, partners and friends at the Salle des Anciens next to the Town Hall. 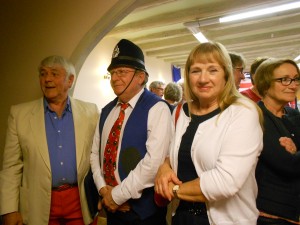 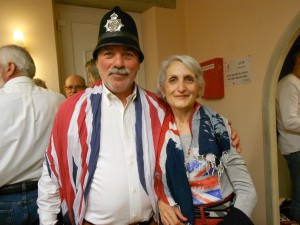 In May there was an exchange of emails between the Box Parish Council and the Box Twinning Group that Twinning Ceremony might be held September / October 2015.

July: Bastille Day was celebrated with Dinner in Box!

Although not held on July 14th the Box Twinning Group committee was determined to bring the flavour of this French celebration to Selwyn Hall – decorated in blue, white & red- on Saturday July 11. Organised by new Committee members who are Box residents, Corinne & Thierry Sarkissian (originally from Marseille). 40 guests were warmly welcomed with an ‘aperitif’ and the chance to meet each other before sitting down to a ‘gastronomique’ four course dinner with a ‘digestif  Trou Normand’ before the cheese course. 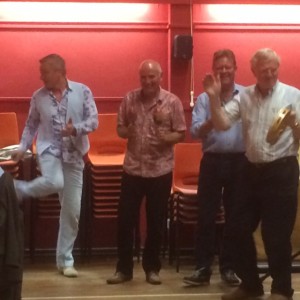 The ‘Jug Street Band’ played for us and provided lively music during the reception and meal culminating in some of our guests ‘jamming’ later in the evening.

The evening was full of fun and games with a blindfold tasting session to discover the identity of red, white and rose wine – not as easy as it sounds. Kev Ford ran a team quiz based on French Revolution questions with team captains invited to entertain us with the Jug Street Band later on.

Box Parish Council agreed to send Vice Chairman, a chain of office, and a framed print of Box as a gift for Sorigny.

Sad news that neither the Chairman nor Vice Chairman of Box Parish Council will be able to attend due to health reasons.

Suggestions of a video link and postponement until 2016.

Confirmation that a Twinning date cannot yet be fixed since Box Parish Council would like to consider augment -ing the agreement with other items using the EU template.

On Friday October 2nd the Box Committee were invited by Karine Roussillat, head teacher, to attend the Junior School in Sorigny where an ‘English Day’ was being held. The school has 168 children, ages 9-11, in 5 classes. Each class teacher was given a project about England and we had the opportunity to join in adding comments about the topics – for example one on Box with great pictures and maps of the area including Bath! The class teachers even entered into the spirit by hiring Grenadier Guards uniforms complete with busbies whilst the children wore uniforms – which has not been the case since 1998. (Video to follow soon).

Delegation of 6 (Michael & Carole Williams, Barry and Cheryl Sims, Sophie WIlliams (+ Ed her husband) attended ‘English weekend’ in Sorigny. A soirée on Saturday evening – Apéritif dînatoire chez Christine & Nicolas Colin-Desbourdes, hosted by the Committee – The reception was very warm and understanding. On the Sunday we had a traditional Loire flat bottomed boat ride on the River Cher followed by an exceptionally generous lunch near the Château d’Azay le Rideau.

A visit to Box by Stephen Helms and Martine Leger. Our French guests were entertained by committee members Barry Sims and Sheila Parker with visits to local attractions, meals out and afternoon tea at The Manor House Hotel, Castle Combe. Sheila Parker provided B&B for the couple who will reciprocate on Sheila’s visit to Sorigny.

Some of the attractions such as Castle Combe, Ditteridge, Laycock, Bradford on Avon & Bath have been added to the Box Album.

Another successful ‘Kevin Ford Quiz Night’ was held at Kingsdown Golf Club on Sunday 15 raising awareness and funds for the twinning ceremony in 2016. 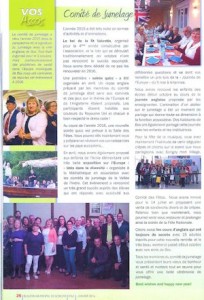 The Sorigny Twinning Committee anticipated that 2015 would see the signing of the Twinning Agreement with the English town of Box in Wiltshire. Everything was arranged for October 3, but unfortunately because of health / personal problems of the Box Parish team, we were obliged to postpone the event to 2016.

However. the year was still very full in terms of activities and entertainment.

The St Valentine’s Day Ball, organized for the fourth consecutive year by the association, has once again not met with the success hoped for the population of Sorigny. It was therefore decided to stop running this event. Equally for the lottery which was traditionally held in October. Competition by other local events seriously affects this type of entertainment. Given the preparation time necessary for the introduction of these events, it was decided to focus on activities closer to the spirit of « Twinning ».

Thus a first « Quiz Night » was held in April. An English meal, prepared by members of the Twinning Committee, was served to the guests and games on the theme of Europe and England were provided. Participants were dressed in the colors of the United Kingdom and everyone respected the dress code! For next year too, 2016, a great quiz night is planned at the Village Hall. Now you can start preparing yourself by updating your knowledge of European countries …

In April, we also provided a lovely exhibition on Europe: « United in diversity » to the children of the Sorigny elementary school. These days were organized at the Library in association with the twinning committees of the Indre Valley. This event met with great success with students who responded diligently to the various issues and were presented with an award at the « Europe Day » on 9 May at Artannes.

We met school children in early October during the day proposed by English teachers. The workshop on twinning was a moment of sharing that gave a additional dimension to the functions of the Twinning association. Some of the inhabitants of Box also came to Sorigny and shared this day with children and teachers.

For the music festival, we now servie pancakes and Chichis (elongated donut similar to the Spanish churro) on the stand we share with the Sorigny Village Festival Committee. So for the July 14 (Bastille day) we innovated by offering sales of various sandwiches and pancakes. Remember well that now, in addition to the entertainment including fireworks offered by the municipality, you can come and eat and prolong the evening of the National Day.

The 2015 report would not be complete without mentioning the English courses that are still a hit with 15 adults enrolled for this new term and the great weekend in early October with our friends from Box gave us some wonderful memories.

At the dawn of this year 2016, all members of the Twinning committee wish you happiness and health, and promise to make every effort to provide a memorable Twinning ceremony.